The Worlds of Science Fiction (Part 1)

One time when I was up home (New Brunswick is "up home" for me in case anybody was wondering), my mom gave me a stack of books she said were mine and needed gone out of the way or whatever. I gladly accepted them coz I was pretty much starving for reading material. So I got them home and started looking through "my" books, which included Gravity's Rainbow (not mine), The Golden Fleece (not mine), The Complete Memoirs of George Sherston (I have no idea who that is), The World at War (also not mine) and other weird stuff. In my mom's defense, she has a very small house and twice as many people live there than do my apartment.

One of the books she pawned off on me was The Worlds of Science Fiction, a collection of short stories which I have never seen before but is still a fairly apt assessment of my tastes. I love short stories since I am really busy and have a hard time getting through a whole novel. Lately, I get about half way through a book and then have to take it back to the library and then put a hold on it and then forget to check my e-mail and then the hold expires and so on and so forth.

Anyway, short stories. The highlights are below. 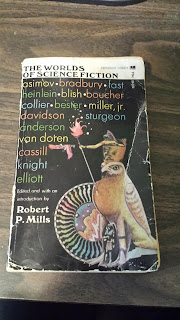 "Evening Primrose" by John Collier is the best one so far I think. It's about a guy who gets tired of dealing with regular life and decides to move into a department store. He hides during the day and dicks around writing poetry and hiding from the night watchman after hours. Then he discovers that there is a society of really creepy people who have been living in the store since the Great Depression. It's really surreal and bizarre and sort of funny and makes me want to read more of John Collier.

"Babel II" by Damon Knight is about a dude who, while selling photographs and models to an interdimensional alien, inadvertently triggers an event which renders all humans on earth unable to understand one another. The story really gets into detail the problems that would ensue in such a scenario (for example, all airplanes are grounded because they have no radio communication). I liked it because it presented me with an idea that I hadn't really contemplated before and I had no idea where the story was going.

"Memento Homo", about an elderly spacer on his death bed, was a nice read and I got really excited because it was by Walter M. Miller and he's a really good writer. "'All You Zombies--'", about a time traveler who is his own mother and father is a weird enough idea that I spent a lot of time thinking about it and discussing it at work, but I got really annoyed because it's by Robert A. Heinlein and I really don't like his writing.

The other stories I read so far are nothing really to write home about. I'm only about halfway through the book now and will post again when I'm finished.

Posted by fingerwitch at 6:21 PM