Last summer I planted my first garden in a space I shared with my roommate. It wasn't much of a garden - my section was poorly planned and yielded little more than two bell peppers and a handful of herbs before I killed everything with neglect, but it was fun and I learned a lot in the process.
Over the winter I moved into my own place which has little in the way of garden space so I started growing stuff inside. Most of what I planted was originally kitchen scraps so I'm calling the whole thing learning experience. So far, so okay.

I had a few planters left from my old place and I bought a couple more at Canadian Tire and Halifax Seed but the cost adds up pretty quickly when you're trying to grow a bunch of different things so I repurposed some containers I had lying around into new planters. By which I means I dug a bunch of shit out of the garbage, poked holes in the bottom, and went to town.

This stuff doesn't look great but it is functional. Some things are, of course, more functional, or easy to work with, than others. And that's why I'm sharing my insight with you, gentle reader, so that you may learn from my weird mistakes and enjoy the piece of mind that comes from not paying for stuff you can make yourself out of garbage. 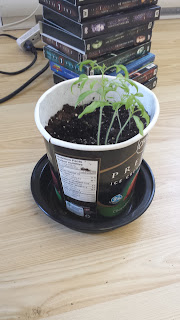 The first thing I tried was an ice cream container which was the best of all of them. The one I used was made out of that plasticized cardboard stuff so it was really easy to poke drainage holes in the bottom. Since this was my first one, I underestimated how many holes I needed to poke in there though so I did end up with a bit of a drainage issue. My advice: poke a shitload of holes. Poke holes in the sides. Since the material is coated in plastic it has no natural drainage or absorbency. 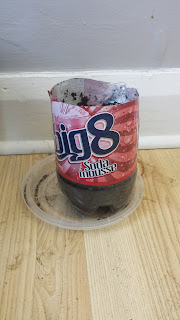 This was the end of a celery I bought at the store. This container worked really well actually until I left it too close to the baseboard heater and it basically melted. I think it was too hot for the celery also and it died. So, yeah, don't do that. 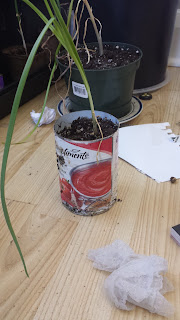 I would not recommend soup cans. They are the most customizable, but the hardest to work with. I did not know this, but apparently the bottom end of the can is way thicker than the top, and cutting drainage holes is really hard. Yes I tried a can opener. I ended up using a nail and another can to hammer it in (I don't own a hammer for some reason). The garlic is okay with all that, though. 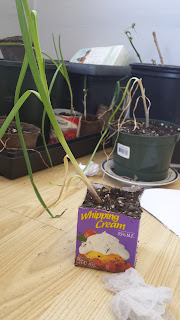 Milk cartons are about the same as ice cream containers in terms of ease of use, plus they usually come in fun colours, but you have to be really, really really careful when washing them out because milk ingredients seem to get caught in the corners super easy and then make life miserable for everybody.
Posted by fingerwitch at 1:14 PM