Excuse me for any spelling mistakes and glaring grammatical errors, I'm writing this on my phone coz my computer "failed to start" today. I used to panic whenever that happened but now I'm kinda like "meh, she'll run tomorrow".

aaaanywho, this wine was on the special rack on valentine's day and it had a cool label and it cost more than twelve bucks so I figured it'd be a nice treat and picked it up.

I don't actually know what the fuck a petite Sirah is but it sounded to me like a little shiraz and I like shiraz so why not.

It lived entirely up to my expectations. It's rich and smooth, almost like drinking cream, with a fruity undertone, really tasty, much like a shiraz. It's Not quite as heavy though, which is quite nice. I rather enjoyed this wine, would buy again.

Ravenswood is a California winery and produces several other wines which I may well try in the future. They also have a partnership with the sriracha people? So presumably that means there is wine infused chili sauce somewhere out there? My birthday's coming up in like six and a half months, just sayin.

Ravenswood can be found online here. 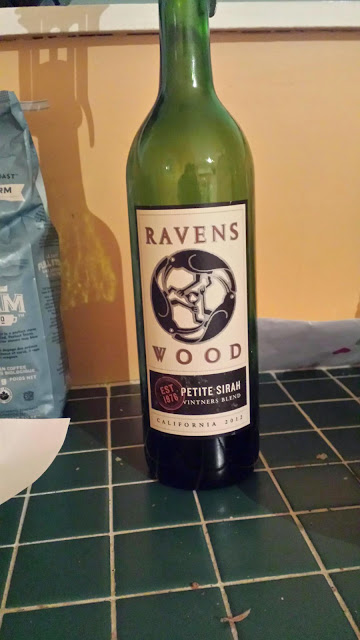