I altered the recipe somewhat, the main difference being I used my home-flavoured gin as the base which made it super fucking tangy. It's so limey it overpowered the taste of everything in the drink, so I'm really not sure what to use it for. I filtered the bourbon too but I haven't used it in anything yet (I did indeed use the bourbon soaked cherries as filling in a Cherry-Gouda pie which was fantastic but super duper strong on the bourbon flavour). I think if I were to make lime gin again I would use a lot less lime. Anywho, the recipe I used is as follows:

1 oz. lime gin
1 oz. Lillet Blanc
1 oz. orange juice
marschino cherry
Shake the shit out of it on ice and pour it into whatever kind of glass you got. Garnish with the cherry. Or two cherries. Coz cherries are good. They sunk to the bottom and were well soaked with booze by the time I drank them.

So short story long, this dirnk didn't really work out as well as I'd hoped but I did start drinking the Lillet Blanc on its own and it's actually pretty darn tasty. 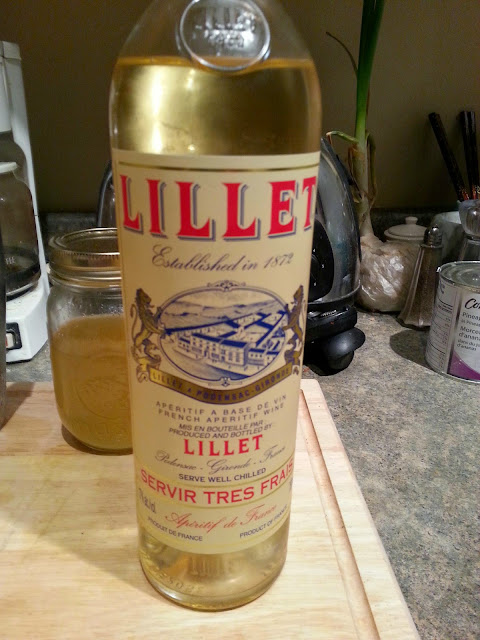 It's like an extra sweet white wine with fruity flavours. I think, if mixed with soda water (or seven up if you're disgusting) it would make a really nice summer cooler. I popped a cherry in there coz fuckit and that was nice. It doesn't really feel like a wine drunk either, it's a little milder. I would recommend it.

Lillet's website is here - there is a Lillet Rouge and a Lillet Rose, both of which I would be interested in trying. There's also recipes on their site, not just for cocktails but also for food, if you're into stuff like that.
Posted by fingerwitch at 9:55 PM