A couple of weeks ago I picked up this bottle of whiskey as my pre-drink, mostly because I couldn't decide between Crown Royal and bourbon and the label was fancy and it said it was distilled in small batches and apparently I'm a hipster now. 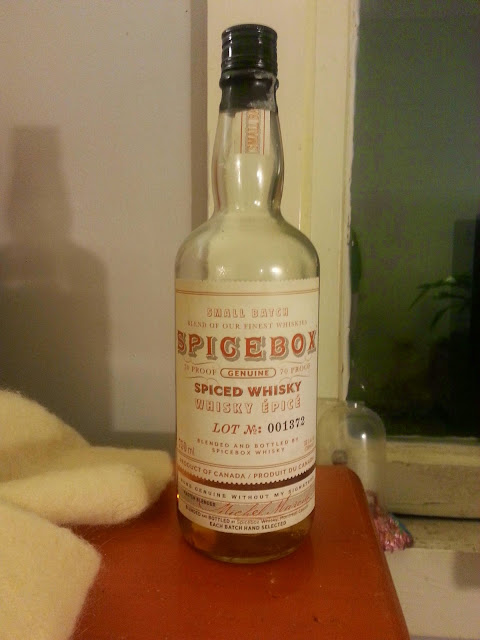 I'm not a big whiskey drinker, but this was alright. It's really smooth and tastes like vanilla which is nice. If you like a manly whiskey with a good burn to it, I would say this is not the whiskey for you. However, if you want a pleasant, girly whiskey, I would highly recommend it. You can drink it straight without the coughing, and it tastes fucking amazing in coke. If you like, say, Captain Morgan's Silver Spiced Rum, you will definitely like this.

Spicebox Whisky's website is here.
Posted by fingerwitch at 2:24 PM No comments:

9 Things That Annoy Me

They can't just make a car that's a regular car anymore. Nope, they have to keep introducing features that are supposed to make your drive more pleasant or something but just seem useless and irritating. Like big touch screens in the dash with all kinds of settings because it seems sensible to adjust my audio preferences while I'm driving on the highway. The controls are always in weird places and there's all these different tricks to start the fucking things.

And then there's those super sensitive "rear parking aides" that are all the rage. Those things just beep to beat the band and are unable to differentiate when you're about to back into another car or run over a leaf. I will admit that the cameras in the dash are pretty useful when you're tired and trying to back into a spot. I'd rather have cameras and sensors on the front of the vehicles though coz I have a way harder time judging where the front bumber of the car is in relation to other cars using just my eyes.

The most irritating thing ever was a car I got into one time with no shifter. It just had some buttons on the console which felt so goddamn wrong. It was confusing, and I couldn't rest my arm on the shifter while I was driving because there was no shifter. I set it on the arm rest and kept accidentally poking the volume control on the stereo which of course was touch operated bullshit goddamnit I hated that car. Don't get a car like that.

More specifically, people who don't know how to wait at the pumps and just zip around trying to get into the next available space as quickly as possible. Yeeeeah, I'm talking about you, fucker. There's nothing quite like waiting politely in the queue like a decent human being and when your turn finally comes around, some senile old fuck just scoots in from the other side so you have to just sit there and glare at the guy until he moves.

So I was chasing this guy for the last few months and he had this terrible habit of agreeing to have a coffee with me and I'd say something like "okay, when should I meet you?" because he lived an hour's drive away and some planning was necessary, and he'd never respond. Or I'd invite him over and he'd say, "yeah I'll probably be down" and then I wouldn't hear from him again.

I cannot tell you how fucking aggravating that was. It made it impossible for me to relax or do anything besides sit and wait for him to text me back all goddamn night. I don't know why it would have been so hard to say "Hey, I'm gonna do something else tonight". That's just common courtesy, plus I would have been way less mad.

COFFEE GROUNDS IN THE COFFEE

It's weird, and it's gross. End of story.

Unless you used, like, a french press, then it's somewhat more acceptable.

Still uncalled for, though.

WHEN WINDOWS EXPLORER IS DISORGANIZED

Suppose you're at your friend's house. Theyw ant to show you a picture. Or your boss is going to print off a document for you. They fire up their computer and go into their documents and it's total fucking chaos. It takes them five mionutes to scroll through all their shit, mumbling "Oop, that's ... oh, no, that's not it" until they find whatever dumb things they wanted to show you.

It drives me up the goddamn wall. For reference, this is what Windows Explorer looks like on my computer.

There is no reason for that to be untidy. It's not like organizing real documents, which requires effort and is beyond the scope of my ambition. It's just clicking on stuff for half an hour tops, which is what you're going to be doing tonight anyway. You'll be happy you did and so will your friends and family.

They combine the anxiety of waiting, the fear of government, the disappointment of mediocre customer service and the frustration of inconvenient locations. Fuck you, DMV.

I`m going to set the record straight on this one. I do not actually have a problem with dolphins themselves. I have a problem with people who get all gaga about how cute they are. Dolphins are not cute. Dolphins are sadistic, murderous rapists of the sea. Kinda like vikings. Sure, they've got smiley faces and clap and giggle a lot. So does the Joker. How cute is he? Not very.

And that's cool. Dolphins are just being dolphins, and they're remarkably like people. But until I hear somebody say how adorable it is to watch a guy fuck a small animal to death and then continue fucking the corpse, I'm going to be annoyed when I hear people saying how cute dolphins are.

When food is supposed to be hot, god damnit it had better be piping, I get so annoyed when I put my soup or chili or oatmeal or whatever the fuck in the microwave and zap it for two minutes and take the bowl out and the bowl's hotter than fuck but what's in the bowl is only warm-ish.

Or when I'm making a panini and the bread is burning but the cheese isn't even totally melted and the stuff in the middle of the sandwich is cold.

I find most convenient, home appliances (microwaves, sandwich makers and the like) are really unreliable tools for heating food and the only way to guarantee that your food is going to be throroughly hot is to heat it on the stove or in the oven.

I think we all have at least one friend who loses their fucking mind at the idea of a movie, game, show, or book being 'spoiled'. You'll be explaining how to make soap or something and be like, "well y'know that scene in Fight Club where-" and they'll freak the fuck out, yelling "NO, man, NO! I haven't seen it yet, you're gonna ruin it" coz they've gone this long without having it ruined and it must continue to be unruined for them.

I do not fucking understand that at all. That's partly because I really don't like to be surprised. And partly because it's absolutely god damn ridiculous. If you're at the point where you're so worried about a movie or whatever being ruined that you actually yell at me when I mention it, maybe you should just go watch the fucking movie and get it over with so the rest of us can get on with our lives.

Also, how exactly is the movie ruined? So now you know that the narrator and Tyler Durden are the same dude (gonna stick with the Fight Club example). You'd probably forget about that if you didn't make such a big fucking deal about it. Furthermore, I've seen Fight Club a bunch of times and read the book and it's not any less good for knowing what's going on in it.
Posted by fingerwitch at 1:30 PM No comments:

Continuing my recent obsession with food-beer pairing, I picked out a nice light wheat ale to go with a nice light quiche. I had a helluva time finding a beer that was just a wheat ale, and not apricot wheat or honey wheat or whatever the fuck else, but I managed to find Granville Island's Robson Street Hefeweizen, an unfiltered wheat ale with a pretty yellow label, deep within the bowels of the NSLC beer cooler. 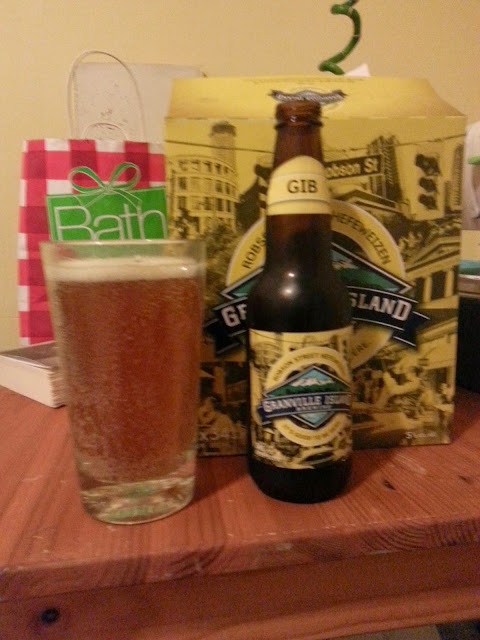 I've said it before and I'll say it again - I'm not a huge fan of beers on the lighter end of the spectrum, but I needed something mild enough that it wouldn't overpower the subtle eggy-ness of the quiche. And this did the trick. As far as lighter-coloured beers go, this is not bad. It's unfiltered so it's a little on the cloudy side and neither as fizzy or yeasty as I would have expected from looking at it, which I like a lot. It's got some slightly fruity elements but not enough to bother me, and it goes down pretty smooth which is nice. 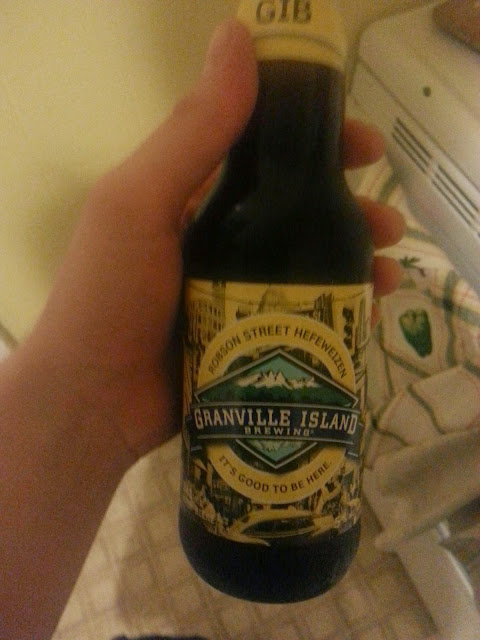 I don't feel strongly about this beer either way to be truthful. It did the trick with the quiche - otherwise it's a very inoffensive beer which I wouldn't go out of my way to drink if it was handed to me, but wouldn't likely buy again.

Granville Island Brewing is based in Vancouver. Their website is here.
Posted by fingerwitch at 4:23 PM No comments: