I was going to write today about living in hillbilly country but that post isn't finished so instead I figured I'd tell y'all the more comical aspects of my drinking problem. I'm not one of those people who can have a few drinks and just enjoy being drunk. Nope. I'm the type who has to prove how sober they are by trying to have intellectual conversations, start fights, have sex and drive a car, all with no success whatsoever. But more than anything, I like to dance. Who doesn't? I can even say that I really hated dancing until I started drinking regularly.

Now, there's one drinking establishment I frequent more than any other and one night, during a particularly raucous dance, some cruel individual decided to bring a video camera and record the entire party. That wouldn't have been so bad except that an acquaintance happened to get a copy of that recording and showed it to me.

Embarassing would be a bit of an understatement. The embarassing part was when I started screaming nigh incoherantly about (I think?) wanting to fight everybody in the bar. It went entirely downhill from there. As words cannot describe the dances performed by myself and one other person who shall remain nameless for protection, I have captured the whole thing in a series of sketches. Please forgive the roughness of the sketches, I may have been drunk when I did them. 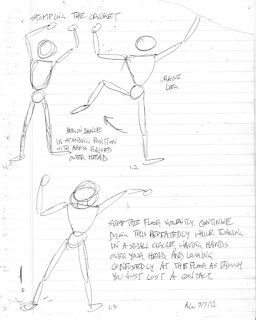 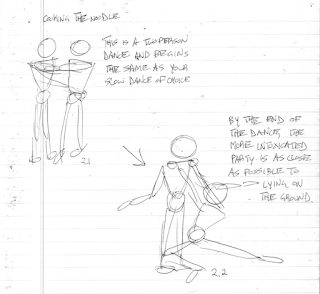 and finally, FLIGHT OF THE ALBATROSS 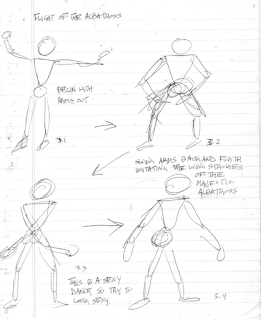 And there you have it. Tune in next week for some other stupid and disturbing thing.
Posted by fingerwitch at 10:22 PM