Some artwork I've been working on for my CDs. I decided to do twenty unique covers which in retrospect was really stupid, but you know. I decided to copy drawings out of my sketchbook rather than try to come up with twenty new drawings in one sitting and... it's kinda weird. I mean, when I'm drawing in my sketchbook I will do maybe one, two drawings at a time, which reflect whatever mood I'm in or what I'm thinking about. But drawing twenty of my old drawings in succession is rather creepy. I'm really starting to freak myself out (I've only done the pencil sketches on most of them so I get to draw them AGAIN! Yay!). I mean... I drew a bondage hotdog. Like... whatt the hell is that? Sure, a bondage hotdog by itself is one thing, but in combination with bleeding dicks, guys with their organs hanging out and so many armless prostitutes... I'm starting to realize that I may be slightly strange. Jesus. But enough of that. To the pictures... 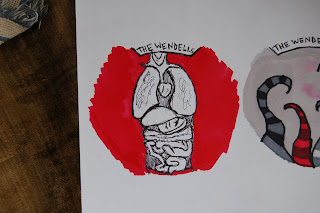 One of the skins, and my absolute favourite thing that I have ever drawn. I dunno why, but I think it looks cool. I'm thinking I might start just drawing organ diagrams from now on. What's really sad about it though is that I have to take the centre out to put it on a CD so I'll lose the heart and most of the left lung and the liver and stomach. Leaving not that much. Mostly just the intestine. Which doesn't look that good. I think I'll scan it and save it for future use. 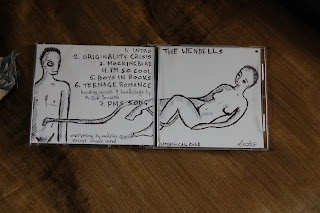 This is the only finished case and is a picture of a man still attached to his mother via the umbilical cord. Lovely. It looks really cheap to me for some reason, I guess because everything is white. But the marker bleeds! I can't fill in the empty spaces. Anyway, the back is already in there and I don't want to take it out again. So yeah. I haven't finished the skin for this CD though so it's not really ready.

Click here to see more about my music and listen to some sample tracks. Woo hoo.
Posted by fingerwitch at 2:02 PM